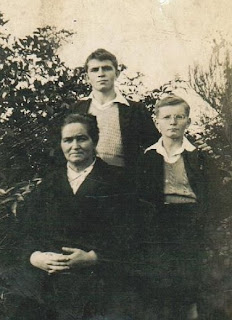 Whilst looking at the source of blog views one assumes that there would be hits from North America and Ireland, but when you see them from Greece, Germany, Australia, Uzbekistan and many more, you just wonder who they are. The Greek Corridan Connection was solved when I got an email from Terry Corridan in Athens. Terry was hoping some of our readers may be able to assist her in finding a little more information about her family. Terry was born in Dublin and was one of 6 children of Thomas Corridan and Annie Connolly. Thomas was born in Listowel in about 1920 and along with his younger brother Seamus (born around 1922) attended Listowel National School. Thomas went to Dublin and worked in the Civil Service. Seamus went to London and married a Lady from Listowel to where they retired in their latter years. Their father again we think was Patrick and he (we think) was married to a local lady Eleanore (Nell) Connor or O'Connor. Patrick died when the two boys were in infancy. It is thought that he may have come from Curraghtoosane area. Any help or suggestions would be most welcome.