The Origins of Corridan's Cross

This is the Cottage and Land holding that gives it's name to Corridan's Cross.
It could be yours ........or at least it could have been up to a year or so. It was put on the market shortly after the passing of its last resident , legend and jovial and lovable  rogue.. Billy Mason. 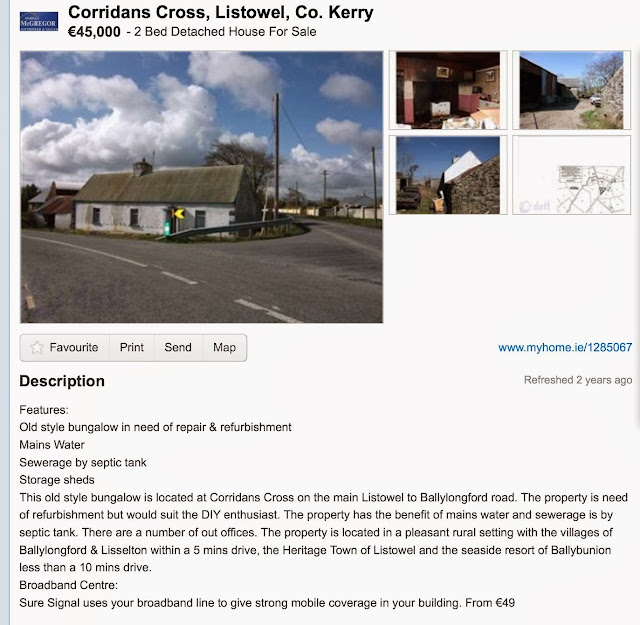 Corridan's Cross in the Townland of Kilgarvan got its name from one William Corridan. William Corridan (1837-1898) was the son of Patrick Corridan and Catherine Reidy who married in Duagh in 1826 . He  worked as a Steward or farm Manager at Eagor Sandes, Ballyhennessey .  In the early 1880's he purchased 10-20 acres at Kilgarvan . William I think had 5/6 daughters and 2 sons. One son went to USA and William Jnr stayed at home. He was born 1881 and died in Kilgarvan  on 19-2-1971 aged 90. Old William as well as his son William were both buried in the bosom of The Corridan Family Grave in Duagh.
Elizabeth one of Williams daughters stayed at home and married a Mason and among their children were Helen & Billy. Helen went to the USA where she worked at The Roger Smith Hotel on Park Avenue, New York.  Helen was a Mother Theresa like figure in New York ,in that she endeavoured that every young Irish emigrant got a start in some job or other.
Billy looked after his Mother and  the House where there never was a dull moment, as he had an open door policy and anyone travelling the Roads was more than welcome to call.
Elizabeth Mason died aged 95 in November of 1989.