Alas ! I was very sorry to learn of the passing of Edmond Corridan  last April in Vancouver. To his Wife Brenda, son John, daughter  Madeline , their families and extended families in Knockmaol , I extend my deepest sympathy to you all 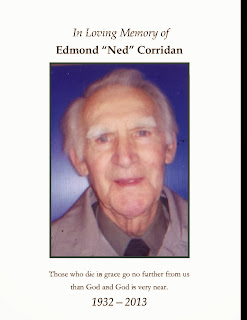 On learning of Ned's passing I asked Madeline to put a few words together to give us a picture of the man that was Edmond Corridan. Mandy (Madeline) wrote the following


"Edmund Corridan known as Ned was born in Abbeyfeale, in Feb 1932. His parents Jack and Rosalee owned a dairy farm. His fondest memories of growing up on the farm was drinking the warm milk from the cows and racing around with his border collie Rover.
After leaving school at age 18, he left the farm and moved to England where he joined his older brother John. It was here that he met his wife Brenda. They had two children, John and Madeline.
He worked at a chain manufacturing company, and they were opening a new plant in South Africa. Ned jumped at the chance to go to a new country. So the family moved to a small town just outside of Johannesburg.
Ned loved the warm sunny climate and enjoyed working in his garden growing roses and peach trees.
He was an active member of the local Catholic church and eventually becoming a Sunday school teacher.
In 1997 Ned and Brenda left South Africa and moved to Vancouver Canada to join their daughter and her family. Once again Ned pursued his passion for gardening. He was an enthusiastic bowler and attended many tournaments. He joined the local church and became an extraordinary Minister of the Eucharist, visiting the hospital every Friday and going to many peoples homes. He loved doing this and was visiting people right up to a few weeks before he passed away.
He was  active and healthy right up to 3 months before he died. He developed a cough and it took 2 months for the doctors to diagnose advanced lung cancer. He passed away 2 weeks later. It was long enough to say goodbye to everyone he loved, but not so long that he suffered. He had lived a long and happy life spanning 3 continents.
Ned, my dad will always be remembered as a quiet spoken gentleman with never a harsh word for anyone. A kind and loving spirit who we all loved dearly."

Even though I never met Ned or Brenda, I spoke to them several times on the phone and got the feeling as if I knew them all my life. Below are some photos that I am grateful to Ned for sharing them with me. 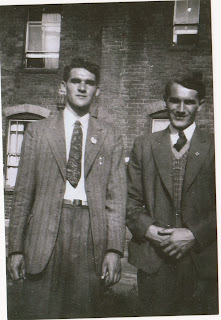 This was taken in 1953 in England with his brother John. John retired to Listowel and passed away in 2009/2010 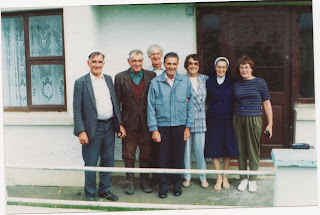 This was the first and last Family reunion in Knockmaol in 1993. They are John, Jim, Ned , Tim
Eileen(Mallon), Sr Helena and Joan(Mercer) 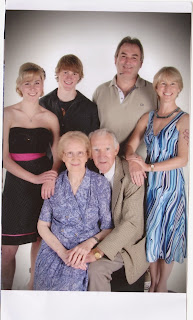 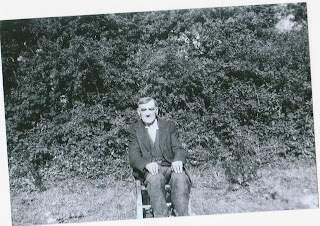 This is the one and only picture available of Ned's father Jack 'Jamesy'  Corridan who died in 1960. He was also known as Jack d'athlete . He was according to Ned a very accomplished athlete and Ned recalled of how he would run to a race meeting, win the race and then run home. In his day , after beating the Munster Champion he got an offer to go and run in the USA. He turned down the offer as he felt that due to the physical demands of training that Athletes had a very short career..it wasn't for him
Posted by PCorridan at 08:44