Jerry Lyons and The Gortagleanna Tragedy- The Corridan Connection 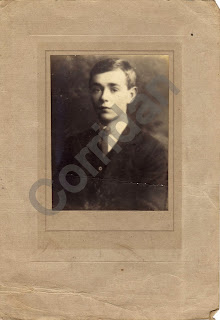 On  May 12th 1921, during The War of  Independence ,  a troop of Black &Tans were travelling out from Listowel towards Athea when they arrested four young unarmed men in Gortaglanna. Prior to this the Barracks in Listowel had been burnt out and the troops, heavy with drink and bent on revenge decided to take these young men into a field, interrogate them , beat them for an hour before executing them. The first to be shot was Jerry Lyons (right). When this happened , Con Dee decided , that as he was going to be shot anyway, to make a run for it. He did, and almost immediately took a bullet in the thigh but managed to keep going. He ran for about 3 miles and survived. He was never recapturedand remained in hiding until the truce. His comrades Patrick Dalton and Paddy Walsh were both shot


Jerry Lyons ( pictured above ) was one of three children born to Anne & Jeremiah Lyons. (the others being Mary who married a Tom Dillon in Duagh and  Fr John who went to New York). Anne Corridan Lyons was the 3rd child and daughter of Patsy Corridan and Mary O Connor in Moyessa about 1858. Jerry was I believe at the time, a student at The Royal College of Surgeons, Dublin

SWORN STATEMENT ON THE INCIDENTS AT GORTAGLANNA MADE BY CON DEE
BEFORE THOMAS R. HILL, J.P., TARBERT, IN JUNE 1921.


“About nine-thirty a.m. on Thursday, May twelfth, 1921, I Cornelius Dee, accompanied by Patrick Dalton and Patrick Walsh [Dee's first cousin], left Athea unarmed, where we had been attending a mission given by the Redemptorist Fathers. We were walking along the road leading to Listowel when at Gortaglanna bridge we met Jerry Lyons; he was cycling. He dismounted and began talking about various happenings. After a few minutes Paddy Walsh suggested that we should go into a field as it would be safer than the road-side. We moved and were just inside the fence when we heard the noise of a lorry. ‘Take cover, lads,’ I advised, and we tried to conceal ourselves as best we could. Jerry Lyons, Paddy Dalton and I took cover immediately. Paddy Walsh ran to the end of a field and lay down. Very soon we were surrounded by men in the uniforms of the Royal Irish Constabulary. ‘We are done, Connie,’ said Paddy Dalton. ‘Come out, lads,’ I said, ‘with our hands up.’ Jerry Lyons, Paddy Dalton and myself stood with our hands over our heads. Paddy Walsh ran towards us. We were met with a torrent of abuse and foul language. I remember such expressions as ‘Ye murderers’, ‘Ye b “, ‘We have got the real root’, ‘We have got the flying column’. We were asked our names and gave them correctly; we were searched and found unarmed, having nothing but a copy of the Irish Independent.We were then compelled to undress and while we were fastening our clothes again we were beaten with rifles, struck with revolvers and thrown on the ground and kicked in trying to save ourselves. Then we were separated some distance from each other; four or five men came round each of us and my captors continued to beat me with their rifles and hit me with their fists. After about twenty minutes we were marched towards the road and then to the lorries. Paddy Walsh and Paddy Dalton were put in the first lorry. I was put in the second, and Jerry Lyons in the third. The lorries were then driven for about a half a mile towards Athea. They were then stopped and turned round. Paddy Walsh and Paddy Dalton were changed to the lorry in which I was. Jerry Lyons was not changed out of the last lorry, which was now leading. The lorries were then driven back the same road for about a mile. We were then ordered out of them. I looked at my companions; I saw blood on Jerry Lyons’ face and on Paddy Walsh’s mouth. Paddy Dalton was bleeding from the nose. We were then asked to run but we refused. We were again beaten with the rifles and ordered into a field by the roadside. We refused but were forced into the field. We asked for a trial but the Black and Tans laughed and jeered and called us murderers.
We were put standing in line facing a fence about forty yards from the road. I was placed first on the right, Jerry Lyons was next, Paddy Dalton next, and Paddy Walsh on the left. Then a Black and Tan with a rifle resting on the fence was put in front of each of us, about five yards distant. There were about ten more Black and Tans standing behind them. I looked straight into the face of the man in front of me. He delayed about twenty seconds as if he would like one of his companions to fire first. The second Black and Tan fired. Jerry Lyons flung up his arms, moaned and fell backwards. I glanced at him and noticed blood coming on his waistcoat; I turned round and ran. I was gone about twelve yards when I got wounded in the right thigh. My leg bent under me, but I held on running although I had to limp. I felt that I was being chased and I heard the bullets whizzing past me.
One of the lorries was driven along the road on my front and fire was maintained from it. After I had run for about a mile and a half I threw away my coat, collar, tie and puttees. The Tans continued to follow me for fully three miles. When too exhausted to run further, I flung myself into a drain in an oats garden. I was there about forty-five minutes when two men came along. They assisted me to walk for about forty yards. I was limping so much that one of them sent for a car and I was taken to a house.
I recognised Head Constable Smith, Listowel, along with the Black and Tans present at the massacre; also Constable Raymond, and there was one in the uniform of a district inspector of the Royal Irish Constabulary. 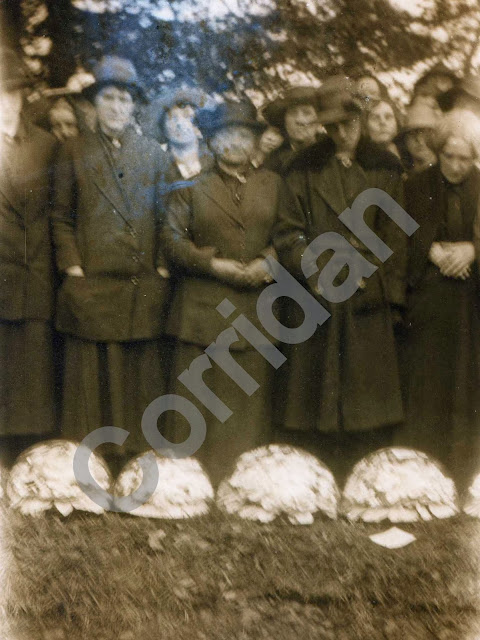 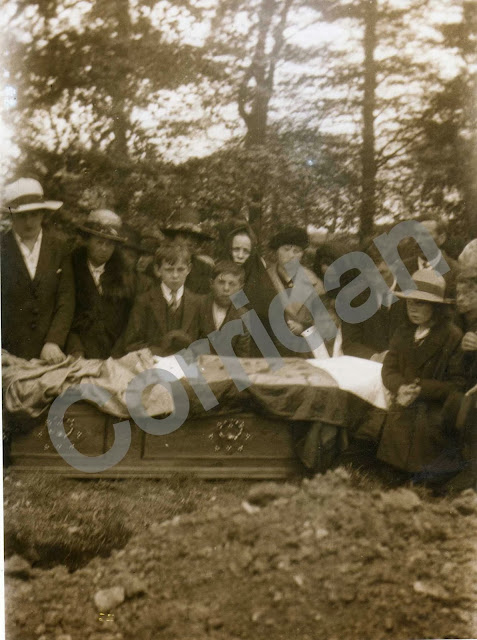 Above are two shots of Jerry Lyons interment at Springmount Cemetery in Duagh, the Ancestral burial place for all the Duagh Corridans. As  to who the mourners are ...I have no definites. 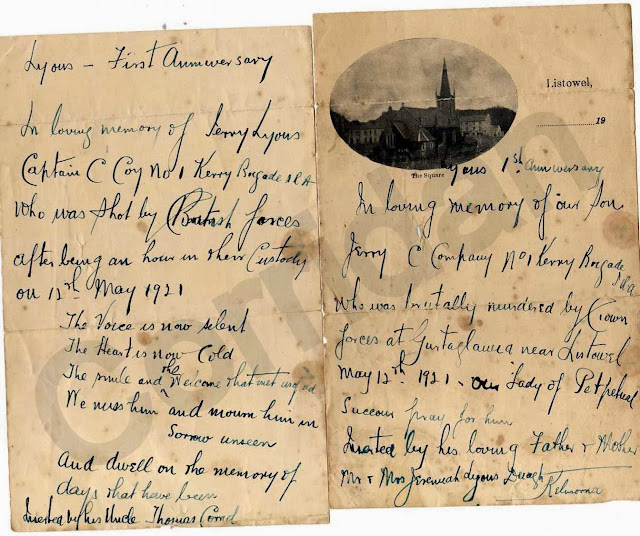 Above are two drafts of "In Memoriam" to mark the First Anniversary of Jerry's passing.(presumably for inclusion in the Kerryman weekly newspaper)
The one on the left was written by his Uncle Tom who had a Pub/Grocer at upper William St., Listowel on his own behalf. The hand writing on the one on right suggests that it was also written by his Uncle Tom on behalf of Mr  & Mrs Jeremiah Lyons, the parents of Jerry.

This Plaque still rests softly on the sod of Jerry Lyons Grave over 90 years later
Posted by PCorridan at 14:54